This news really gives me some hope. This guy, Nate Silver is a statistician who is very good at predicting the likelihood of elections based off of statistics. He has recently come out with this timeline for the legalization of same-sex marriage in the United States. Granted it has Utah tapping out in 2013 and I think he just forgot about the Mormon Theocracy here in Utah. I think it will take a Federal constitutional amendment in order to change things in Utah before any revelation comes.

Here is a Map that I found through Grant and the text of Silvers findings. If you follow the Link, you can see that the first comment addresses Utah. 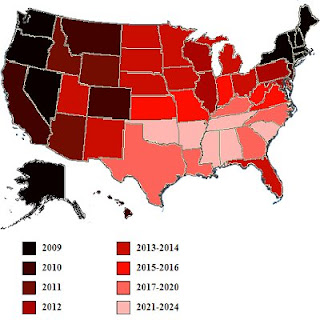 The Iowa Supreme Court ruled today that same-sex marriage is protected under that state’s constitution. As in California, there will of course be an effort to amend the state constitution to prohibit gay marriage. In Iowa, however, the hurdle to amending the constitution is fairly high: it will have to be approved by two consecutive sessions of the state legislature and then by a majority of the voters. Most likely, this means that Iowans won’t vote on the issue until 2012. This is good news for defenders of marriage equity, because while you might know it from Proposition 8’s victory last year, voter initiatives to ban gay marriage are becoming harder and harder to pass every year. I looked at the 30 instances in which a state has attempted to pass a constitutional ban on gay marriage by voter initiative. The list includes Arizona twice, which voted on different versions of such an amendment in 2006 and 2008, and excludes Hawaii, which voted to permit the legislature to ban gay marriage but did not actually alter the state’s constitution. I then built a regression model that looked at a series of political and demographic variables in each of these states and attempted to predict the percentage of the vote that the marriage ban would receive. It turns out that you can build a very effective model by including just three variables: 1. The year in which the amendment was voted upon; 2. The percentage of adults in 2008 Gallup tracking surveys who said that religion was an important part of their daily lives; 3. The percentage of white evangelicals in the state. These variables collectively account for about three-quarters of the variance in the performance of marriage bans in different states. The model predicts, for example, that a marriage ban in California in 2008 would have passed with 52.1 percent of the vote, almost exactly the fraction actually received by Proposition 8. Unsurprisingly, there is a very strong correspondence between the religiosity of a state and its propensity to ban gay marriage, with a particular “bonus” effect depending on the number of white evangelicals in the state. Marriage bans, however, are losing ground at a rate of slightly less than 2 points per year. So, for example, we’d project that a state in which a marriage ban passed with 60 percent of the vote last year would only have 58 percent of its voters approve the ban this year. All of the other variables that I looked at — race, education levels, party registration, etc. — either did not appear to matter at all, or became redundant once we accounted for religiosity. Nor does it appear to make a significant difference whether the ban affected marriage only, or both marriage and civil unions. So what does this mean for Iowa? The state has roughly average levels of religiosity, including a fair number of white evangelicals, and the model predicts that if Iowans voted on a marriage ban today, it would pass with 56.0 percent of the vote. By 2012, however, the model projects a toss-up: 50.4 percent of Iowans voting to approve the ban, and 49.6 percent opposed. In 2013 and all subsequent years, the model thinks the marriage ban would fail. Below are the dates when the model predicts that each of the 50 states would vote against a marriage ban. Asterisks indicate states which had previously passed amendments to ban gay marriage. 2009 (now) Vermont New Hampshire Massachusetts Maine Rhode Island Connecticut Nevada* Washington Alaska* New York Oregon* 2010 California* Hawaii Montana* New Jersey Colorado* 2011 Wyoming Delaware Idaho* Arizona* 2012 Wisconsin* Pennsylvania Maryland Illinois 2013 Michigan* Minnesota Iowa Ohio* Utah* Florida* 2014 New Mexico North Dakota* Nebraska* South Dakota* 2015 Indiana Virginia* West Virginia Kansas* 2016 Missouri* 2018 Texas* 2019 North Carolina Louisiana* Georgia* 2020 Kentucky* 2021 South Carolina* Oklahoma* 2022 Tennessee* Arkansas* 2023 Alabama* 2024 Mississippi* The model predicts that by 2012, almost half of the 50 states would vote against a marriage ban, including several states that had previously voted to ban it. In fact, voters in Oregon, Nevada and Alaska (which Sarah Palin aside, is far more libertarian than culturally conservative) might already have second thoughts about the marriage bans that they’d previously passed. By 2016, only a handful of states in the Deep South would vote to ban gay marriage, with Mississippi being the last one to come around in 2024. It is entirely possible, of course, that past trends will not be predictive of future results. There could be a backlash against gay marriage, somewhat as there was a backlash against drug legalization in the 1980s. Alternatively, there could be a paradigmatic shift in favor of permitting gay marriage, which might make these projections too conservative. Overall, however, marriage bans appear unlikely to be an electoral winner for very much longer, and soon the opposite may prove to be true.