Recently I have been asked and wondering myself “How can I honestly believe that I can enter the celestial kingdom with after living a life with a male partner, given the absolute truth of every facet that the LDS church currently teaches?” I think that I finally have a coherent enough answer to get out on the interwebs. 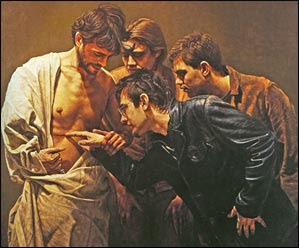 When you first read that name what did you think of? Most will say “Doubting Thomas.” That is, after all what he is most known for by us. However, this is only one of his actions that should cause us to reflect on the Apostle. When Christ wanted to return to Judea, knowing that he probably would be murdered there, Thomas said to the others, “Let us all go that we might die with him.” But Thomas was not remembered for this bravery. His claim to fame came later when he refused to acknowledge the resurrection. He just couldn’t wrap his mind around it. The story goes that he needed to touch Jesus’ wounds to be convinced. Among us he is known as doubting Thomas, the apostle who lacked faith. He is looked upon mostly with, dare I say, contempt at his lack of faith in the resurrected Lord. However, Thomas did believe in Christ and through that belief, he “might have life through [Christ’s] name.”

While we often see Thomas as the doubter, I have to wonder how Christ looks upon him. “For the Lord seeth not as man seeth; for man looketh on the outward appearance, but the Lord looketh on the heart”. I think that Thomas, given his track record of willing sacrifice, to lay down his life for the Lord, as well as his ministry as an apostle of God that he is, even with his doubt is guaranteed a place at the right hand of God. I think that the Lord looks upon us and our hearts and sees our actions and why we did them and that is one facet of how we will be judged and found lacking at the last day, and that it is the measure by which Christ will intercede for us on judgment day. 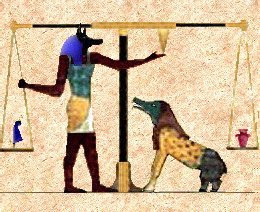 In almost all cases, our lives will be weighed, much like the imagery of the Egyptians, and on one side will be our mistakes and sins, and on the other our positive actions. And while our positive actions alone cannot open the gates of heaven, they can demonstrate a willingness to follow Christ and serve him through serving our fellow man. The one case that I know of in which this is NOT the case is in my ancestor of the heart David son of Jesse.

David was refined and trained throughout his life. He was groomed for his position later in life through several key stages in his development before he became king. And while they were not easy and were serious trials, his perseverance allowed him to become an elect of God. As a sheppard he learned to contemplate on life, and become introspective about himself and his Father in Heaven as he was tending his flocks. As a courtier, he learned self-control, charity, and chivalrous courtesy for those around him. As an outlaw he learned much concerning human nature, particularly with regard to human nature. Each of these stages of life prepared him and sent him through the refiners fire, out of which he became a man after the Lord’s “own heart.” He became the one through whom the line of kings and the king of kings would come forth.

As we all know David sinned with Bathsheba, which was one sin along a path that lead to the murder of Uriah. However David, because of his contrite heart was able to find forgiveness for his sins, all but the murder of Uriah. Because of his time spent ruling righteously, for uniting Israel, and through following the Spirit of Christ, David was granted forgiveness for all BUT the second greatest sin. And even with the second greatest sin left unforgiven and the third greatest sin washed clean, David only lost his exaltation, but he was promised that he would not spend eternity in hell, but would be brought forth into the glory of our father who art in heaven.

So given the examples of Thomas and David, I believe that even if living with a man to whom I am committed for my life is an abomination, that while I might not achieve exaltation, if I dedicate my life towards the two great commandments and devote my life to following Christ through serving my fellow man, and living with a humble and contrite heart, that even with a partner I can achieve Celestial Glory. I still do not know if I really want a male partner in this life yet, it is something that I am still deciding, but if this mindset that I have had the past week continues then I could see myself dating guys regularly by mid-July.