“This is a big F*CKIN deal!” – Vice President Joe Biden

Living in DC has its advantages and its disadvantages. First and foremost, everyone has an opinion on everything. While this may seem overwhelming, I see the lack of apathy here as refreshing. I hear about topics as mundane to me as the 2010 census or the tax code discussed with such vigor that it makes me swell with patriotic pride. 2 weeks ago the protesters were in full swing. There were protesters on Immigration, an HRC Rally on Don’t Ask Don’t Tell that got, more or less, high-jacked by Lt. Dan Choi, and the Tea Partiers protesting against Healthcare reform (known here as HCR – an easy slip up with HRC haha)

I try to have a sense of moderacy on things, as Friedman puts it I consider myself an “radical centrist.” On HCR, I don’t know fully where I stand. I feel the need for broad sweeping changes in HCR and think that the Government program’s track record is pretty good when it comes to healthcare. (3% administration costs in Medicare vs. 15% in the free market) I also understand the fears that this will lead to fewer jobs. I get the sentiment that this is letting the camel’s nose in the tent. I also understand the need and desire of POTUS to provide life-sustaining care to the 34 Million + American’s who can’t afford health insurance.

If I were a congressman, given the information I have now, I probably would have voted for the Healthcare bill. However I am writing this not to tell how I would vote, but to describe what would have happened to me had I voted for the HCR bill.

In the past 7 days elected representatives have been vilified by other MCs and by raw anger of (mainly) Tea Partiers. Some have been called “baby killers,” others wetbacks, and some members of the CBC have been called other racial and ethnic slurs like the “N” word. Our elected officials have been spat upon, bricks have been thrown through office windows, and several have begun to receive death threats. Many of those who voted on the bill have been targeted by helicopter-hunting Palin and her radicalization of the right.

These are human beings. Would you paint a target on my back if I voted for this bill? would you spit on me and call me a faggot?

This lack of civility; this outbreak of anger, has come from men in the streets and men in suits. We have devolved from any semblance of governance in Congress to an entrenched system dedicated to the sole purpose of “beating the other side to a pulp.” – Steve King (R-IA5)
John McCain, in an election year where his seat in congress is on the line, has vowed for “no cooperation for the rest of the year.” I’m sorry but does that sound like a leader and a maverick to you? I respected John McCain, he was a relatively moderate presidential candidate and a respectable person even in defeat. However he is now acting like a petulant child who didn’t get his way.

I admit that the Democrats manhandled this bill through congress. They used many dirty tricks that, quite frankly make me ticked. Both sides have contributed to this change in American Politics, but if I had to choose between the 2 parties, I would rather go with the sneaky, crafty, two-timing Democrats than with the revenge-driven, rage-filled, racist Republicans.

To both parties I say get your act together. Establish decency in yourselves and in your parties. Because lets face it, this is a big F*ckin’ deal. 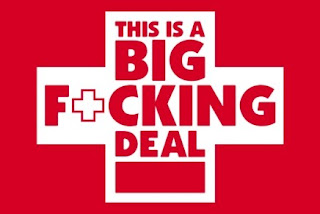