So I work right next to Lafayette Park. On the other side of the park is the White House and so Lafayette park is the perfect location for protests aimed at the President. I look outside my office and just about every day there are several groups of protesters. ACLU, AFL-CIO, TEA Party, feminists, Pro-Israeli groups, Free Palestine groups and most recently Get EQUAL. 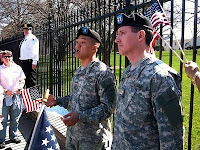 Dan Choi and his group of protesters have been in Lafayette park 3 times now. The first was an HRC rally with Kathy Griffin that was high-jacked by Lt. Dan Choi that ultimately led to Dan and 6 others handcuffing themselves to the White House fence in a call to end Don’t Ask Don’t Tell (DADT). This action created the Get EQUAL Campaign because many people felt that the HRC was failing to do its job well enough and we needed to take a stand and be vocal about our equality. They organized another protest a few weeks ago that again ended with Lt. Dan Choi again handcuffing himself and 6 others to the White house fence. This time however, the Capitol police shut the entire park down. They removed all the media from the event so that no one could see or have footage of what happened to Lt. Dan Choi and his associates. 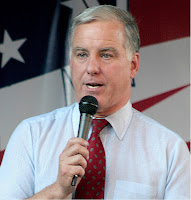 Finally last weekend there was a third protest in Lafayette Park. Lt. Dan Choi had been given an order not to cross a certain line and he toed that line. More people gathered and the former head of the DNC Howard Dean spoke on the need to repeal DADT. His speech was stirring and riveting and I, as a Deaniac, was moved by his words.

The point of these protests is to have President Obama attach an amendment to the Defense Authorization Bill, which is a bill that provides funding for the troops. As such it is almost guaranteed to pass congress and is often a place that congressmen stick pork. The amendment would end change the uniform code of military justice and end DADT as President Obama claimed he would do countless times, most recently during the State of the Union. Politically this is the quickest way of ending DADT. 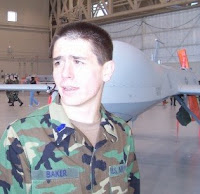 Erstwhile on Capitol Hill the Senate Armed Services Committee asked the Secretary of Defense for his opinion on ending the ban on DADT. Back in February Robert M. Gates (appointed by President Bush) spoke to the Senate Armed Forces Committee and told them that he thought it was time for the DoD to look at the logistics of repealing DADT next year. This was a giant step for the Gay Rights movement because we finally had internal traction on repealing DADT.

When I was at BYU in the Air Force ROTC Secretary of Defense Rumsfeld was replaced with Secretary Gates and I did my research on him. I believe that he is an honest man with a deep sense of honor and personal integrity. I trust and believe in Secretary Gates more than I trust President Obama or nearly any Member of Congress. 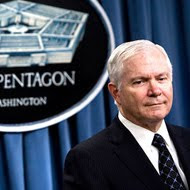 And so when asked for his opinion last week on attaching an amendment to the Defense Authorization Bill that would repeal DADT right now before the DoD review, Robert M. Gates told the Committee “I hope Congress will not do so, as it would send a very damaging message to our men and women in uniform that in essence their views, concerns, and perspectives do not matter on an issue with such a direct impact and consequence for them and their families.”

In the case of DADT I say wait, slow down. We have a democratic president and a democratic House. We can get further politically after the mid-term elections anyway and we can do the right thing. I fully support ending the repeal of DADT but not right now. I trust the opinion of the DoD and Robert M. Gates more than my own knowledge and so my view is that we should hold off on the repeal for now.