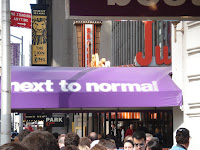 I am sitting on the bus back to DC after just 2 hours of finishing the musical Next to Normal and it I am still in awe. I am not one to get emotional in movies. Sure I laugh at the witty wordplay and enjoy when the plot takes an unexpected turn, but rarely am i touched by a movie or a musical. Next to Normal is an exception to this.

Far from normal, this show is simply extraordinary. I will not give away to reveal in this show because it is quite good, but this show is about one family. A Mother (Diana) who is trying to hold onto her family, her 18-yr old son (Gabe) who is charming and everything his mother could wish for (who incidentally enough moves his body much like a great friend), her 16-yr old daughter (Natalie) who is trying to be perfect, her husband Dan who is working overtime as a husband and father. There is also Natalie’s Boyfriend (Henry) and the shrink (Dr. Madden).

This show is ultimately about how a family struggles to carve out an existence that doesn’t even come close to normal, but they are fine settling for something “next to” normal. You see: 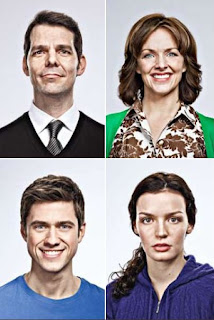 This show is humorous, deep, emotional and revealing all at the same time. The script won a Pulitzer Prize and in my mind this tagline says it the best. “This is more than a feel-good musical it is a feel-everything musical.“ 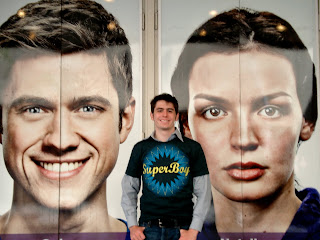 I said above that I don’t get emotional in movies and musicals. Near the end of this show I sat in shock as 3 tears rolled down my cheek carving a trail that is a constant reminder that my life is far from normal but that doesn’t mean I can’t try for something next to normal.