Marriage is one of the “basic civil rights of man,” fundamental to our very existence and survival…. To deny this fundamental freedom on so unsupportable a basis as the racial classifications embodied in these statutes, classifications so directly subversive of the principle of equality at the heart of the Fourteenth Amendment, is surely to deprive all the State’s citizens of liberty without due process of law. The Fourteenth Amendment requires that the freedom of choice to marry not be restricted by invidious racial discrimination. Under our Constitution, the freedom to marry, or not marry, a person of another race resides with the individual and cannot be infringed by the State.

These were some of the defining words in the Supreme Court’s decision on Loving v. Virginia the case that legalized inter-racial marriages nationally. It is important because it is the foundation of many attempts at Marriage Equality in America right now. The case in California Federal court that just ended relied heavily on the principle that Marriage is a “basic civil right of man”, so much so that we allow for prisoners on death row to get married.

I bring up this case because I just watched the movie “Guess Who’s Coming to Dinner” No not the remake with Ashton Kutcher and Bernie Mac, but the original Spencer Tracy movie. Maybe it’s just me (or confirmation bias), but I inject homosexuality into a lot of situations and this one is no different. I look at this movie and I see how two parents who raised their daughter to believe that God made both the Blacks and the Whites and that neither were superior to the other fall in love with “a Negro”.

It puts things into perspective for when I look at other gay mormon’s telling their parents about their fiance’s, or even as an analogy for coming out. As humans we can easily set up our beliefs but until they are challenged we never know how deep they actually are. 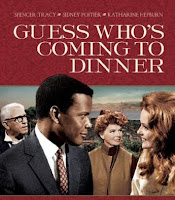 One great line in this movie (which hits a lot of great points btw) happens when Spencer Tracy asks the African American man her daughter is in love with if he has thought about how this will be difficult for their kids. Jude (the African American Doctor/Fiance) replies that yes he is concerned but they will have kids otherwise why get married. Spencer Tracy then asks what his daughter thinks about it and Jude replies that she feels they will all be President of the United States and have a colorful administrations. How Ironic that this film came out in 1967 and Barack Obama was born in 1961.

Another powerful statement that is still relevant today comes from Jude to his own father:

You listen to me. You say you don’t want to tell me how to live my life. So what do you think you’ve been doing? You tell me what rights I’ve got or haven’t got, and what I owe to you for what you’ve done for me. Let me tell you something. I owe you nothing! If you carried that bag a million miles, you did what you’re supposed to do! Because you brought me into this world. And from that day you owed me everything you could ever do for me like I will owe my son if I ever have another. But you don’t own me! You can’t tell me when or where I’m out of line, or try to get me to live my life according to your rules. You don’t even know what I am, Dad, you don’t know who I am. You don’t know how I feel, what I think. And if I tried to explain it the rest of your life you will never understand. You are 30 years older than I am. You and your whole lousy generation believes the way it was for you is the way it’s got to be. And not until your whole generation has lain down and died will the dead weight of you be off our backs! You understand, you’ve got to get off my back! Dad… Dad, you’re my father. I’m your son. I love you. I always have and I always will. But you think of yourself as a colored man. I think of myself as a man. Now, I’ve got a decision to make, hm? And I’ve got to make it alone, and I gotta make it in a hurry. So would you go out there and see after my mother?

I highly recommend this movie and I think you all should take 2 hours and enjoy it as it shows a good dynamic of race relations. Here is a link to the Netflix Instant view copy. Take some time and watch it. I give it a 5 out of 5.

PS, here is a quote from Mrs. Loving about the application of Loving v. Virginia to marriage equality.

Surrounded as I am now by wonderful children and grandchildren, not a day goes by that I don’t think of Richard and our love, our right to marry, and how much it meant to me to have that freedom to marry the person precious to me, even if others thought he was the “wrong kind of person” for me to marry. I believe all Americans, no matter their race, no matter their sex, no matter their sexual orientation, should have that same freedom to marry. Government has no business imposing some people’s religious beliefs over others. Especially if it denies people’s civil rights.I am still not a political person, but I am proud that Richard’s and my name is on a court case that can help reinforce the love, the commitment, the fairness, and the family that so many people, black or white, young or old, gay or straight seek in life. I support the freedom to marry for all. That’s what Loving, and loving, are all about.