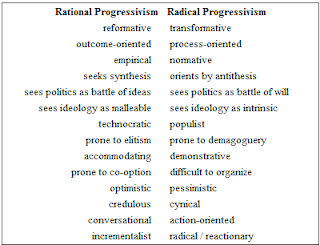 When last I declared my political identity as a “Liberal Republican” I had a few people (Namely Ben and Julie) ask me what I meant by “Liberal” so here I go.

I see that there are at least two distinct groups that claim the title Liberal or Progressive. There are the Liberals that originate from the classic liberals like Locke and Hobbes and there are the modern Liberals who originate from Marx. So for the purposes of discussion I will borrow Nate Silver’s term and call the Marx Liberals “Radical” for their reliance on revolting against the status quo, and the Locke Liberals “Rational” due to their reliance in reason.

My basic philosophy in politics, life, and religion is all about continuing progression. To be apathetic and stagnant is to die. I imagine that all of history humanity has been traveling along a giant escalator, the only problem is that this escalator is going down while we are trying to move up.

In aggregate we have grown and climbed higher even with mistakes and pitfalls along the way. I live in a mindset that new things should be tested and applied as they make sense in relation to past events. I don’t believe that we should stick with something solely because it’s tradition and the way we have always done it. After all, that “tradition” had to start somewhere and it usually started with someone bucking the conventional wisdom of the day.

At the same time I recognize the need to not charge forward blindly with untested ideas simply because they aren’t the status quo. Basically if something works then keep it but be malleable enough to adjust it when something better comes along. Survival of the fittest doesn’t mean the strongest but rather those most able to adapt over time.

For example a radical liberal is an enemy to capitalism. They see it as a way for the top few percent to exercise tyranny over the majority. A conservative sees capitalism as the only way to create freedom and equality of merit – a free market produces the best results. As a rational liberal I look at capitalism as a great system when it is balance. I look at the hubris of man and disagree with the right, that a fully free market is a balanced system. So I believe in a guiding hand of regulation.

I identify myself as a Liberal because I am not a conservative who thinks that the status quo should be maintained. I identify as a Republican because the current radical liberals are all grouped with the Democrats and I also don’t think that the status quo needs to be obliterated into chaos either.

I look at both sides and am willing to find solutions to problems on either side. Some say that means I am corruptible, others that I lack convictions and others still that I am lukewarm water that should be spat out. But it is who I am and the beliefs I hold true. How about you? Do you have strength of convictions that cause you to avoid fully open-minded discussion or are you a Liberal Republican as well?