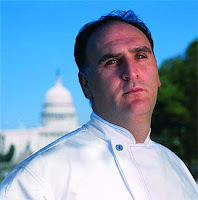 Today I had the great experience to listen to José Andrés speak at Google DC. The topic was “What does light taste like” and oh boy I think it tastes like Kool-Aid. Whatever Kool-Aid José was dishing out I was drinking up. This man is a jack of all trades and master of most. At his core he is a chef, a master of mixing food using creative new methods. But really he is a socially conscious middle of the road venture capitalist who focuses on food.

In the discussion today he ranged from speaking about the problem with just sending free food to Haiti because it obliterates the local economy when the international relief leaves (as it always does) to talking about Farm subsidies in the USA, from Boyles law to King Phillip the 2nd and he tied each item back to food. 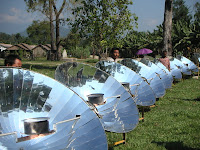 While discussing Haiti he talked about how he traveled down after the earthquake and learned what the people needed and saw that the rice they were being given needed to be cooked and the residents were chopping down the trees on the hillside to cook with. This was destroying the farmlands below and causing avalanches. So José broght 10 Solar cookers (essentially a parabolic dish focusing the solar rays onto a pot) so that the survivors could boil water and cook food using just the sun. He began buying local products and hiring local women to cook in the kitchens he set up so that their would be food AND an economy. He is working to adapt the solar cookers to work with pressure cookers so that the Haitians can boil 8 times the amount of water in half the time. In discussing this he stated simply “Some people call this socialism but it is not socialism, this is not communism, this is logicalism. If you have knowledge that can help someone you need to share it with others so that they can help themselves become better.” To me this is Zion.

While in Haiti he supported buying local because it would help the economy but in his DC restaurants he uses a mixture of local and foreign produce. His reasoning is that 1. a region that only buys local is breeding an unstable economy, and 2. If he can buy tomatoes from Mexico 2 months before it is warm enough in DC to have tomato harvests he is providing a job to a mexican farmer who, without that job, would be even more likely to farm elsewhere, like America.

When the talk is up on YouTube I will post it here, but the truly great thing that he opened my eyes to was brought up because a staffer either sent by Senator Lugar’s office or there on her own asked what she could bring back to her Senator about the farm bill. José made an interesting point that I want you to think about. 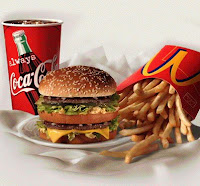 Our sweet American ketchup is sweetened with high fructose corn syrup, our soda’s are sweetened the same way, the boxes that hold Big Macs are made from corn biproducts and the beef used in those burgers is corn-fed. The fast food industry is contributing to our obesity rates immensely, the fast-food industry runs on corn, Corn is subsidized by the US Government. We are literally paying to slowly kill ourselves. 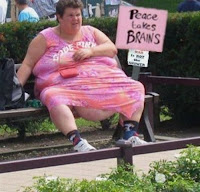 The projections have obesity and obesity related illness to account for 190 Billion dollars in 2010. That is a projected 20% of the Healthcare budget. And that isn’t taking into account the secondary and tertiary diseases that are highly prevalent in obese patients like Kidney Failure which is extremely expensive and is already picked up (80%) by medicare regardless of age. We are literally paying to kill ourselves, albeit ours is a slower suicide.

At the same time Fast Food industries provide low-wage jobs to many Americans, they provide food stuffs in the middle of the night and a warm shelter from the cold. They do provide a good service but if we truly believe in a society of equal opportunity to succeed then we cannot allow these fast-food companies to be subsidized by the American Tax-dollar.

All in all José was phenomenal. His insights at looking beyond the immediate solution at its long-term ramifications have me drinking his Kool-Aid including being on the side of Spain in the battle of the Perejil Island which Goolgle lists as belonging to Morocco instead of Spain.

José, you are an inspiration to all and your fusion of food like liquid that are encompassed about in themselves and the ability to cook with liquid nitrogen will fill the minds and bodies of many and I wish you luck with your next restaurant venture in Las Vegas China Poblano. You have taught me what light tastes like. 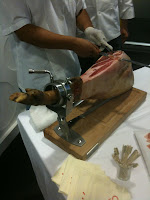 PS this is what I ate after listening to him talk.