President Roosevelt called December 7th, 1941 “a date which will live in infamy” due to the unprovoked attack on Pearl Harbor, and with those words launched us into World War II. Currently we are in the midst of two wars which some believe to be nearly as infamous.

During the equally infamous Vietnam war, Daniel Ellsberg released the “Pentagon Papers” to the New York Times as proof that the Government was lying to the people. At the time, Henry Kissinger dubbed Ellsberg “the most dangerous man in America,” and he was later prosecuted on charges of espionage that were later dismissed in court.

Many, including Ellsberg himself, have compared Ellsberg with Jullian Assange, the founder of the controversial website WikiLeaks who was arrested on the 7th. WikiLeaks recently released confidential documents about both the Afghan and Iraq wars as well as roughly 250,000 U.S. embassy cable communications sent between 1966 and 2010 similar to the Pentagon papers in the 1970’s.

I don’t have an opinion on Assange’s actions, but I want to take a moment to talk about the role of government in policing the Internet that has been brought to light in the midst of this scandal. (What!?! I just went from Pearl Harbor to Vietnam to the Pentagon Papers to WikiLeaks just to get to the role of government? Bear with me, I’ll bring it all together, I promise.)

As the current WikiLeaks scandal “CableGate” came to light and after reading press reports that Amazon.com was hosting WikiLeaks website, Senator Lieberman, Chairman of the Homeland Security and Governmental Affairs Committee, contacted Amazon on Tuesday, November 30th. The following morning, Amazon decided to “terminate its relationship with WikiLeaks.”

Since then a slew of companies have followed suit and likewise ended their relationship with WikiLeaks, companies like Visa, Mastercard, and PayPal. These government-influenced decisions begin to look scarier when you take a step back and notice the pattern. You see, on “Cyber Monday” the Department of Homeland Security took over (not just took down) several websites that sold knockoff goods. Apparently the Government has a kill switch to take over your website and replace it with this warning. 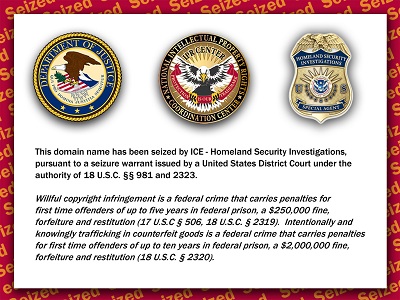 Senator Lieberman’s call for further action regarding WikiLeaks’ associated groups led directly to the removal of visualized content like charts and graphs previously provided by Tableau Software who removed it at the direct “request” of the senator. Now Senator Lieberman is calling for the investigation of the New York Times because of their choice to publish some of the leaked cables.

It is a scary and sobering thought that one man, a single senator can wield so much power as to scare companies into complying with his mere whims, especially when Secretary of Defense, Robert Gates has said that the release of this information is negligible and effects diplomacy only “fairly modestly.” Is it that unfair for me to say that Joe Lieberman is looking a lot like Joe McCarthy as of late?

The Internet was built on freedom of accessibility, and private corporations play a role in that by not discriminating in the content that travels through the now famous “tubes.” But when the government starts to flex their muscles and control the Internet, I draw the line. The government should NOT be tampering with the openness of the Internet.

December 7th will always remain a day of infamy, but will it be for Pearl Harbor or will it mark the start of the government’s crusade in meddling with the Internet?